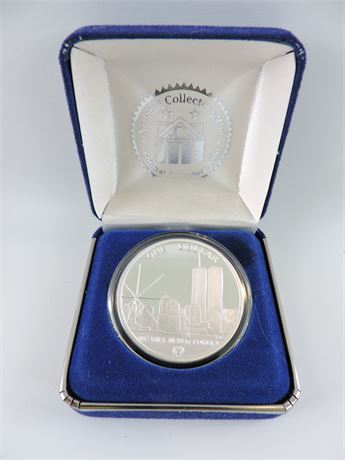 Minted and issued in 2004 under the Commonwealth of the Northern Mariana Islands license and with the minting company SoftSky Inc., this commemorative American coin was actually ordered to be stopped due to the CNMI not having legal authority to issue currency. This item is a great starting piece to a currency collection or a sizeable boast to an already existing one.

2004 Northern Marina Islands Freedom Tower Silver Dollar Coin
- Composition: 0.999 Silver
- Weight: 31.103g
- Diameter: 39mm
- Edge: Smooth with lettering
- Obverse reads: "IN GOD WE TRUST DC FREEDOM TOWER JULY 4, 2004" and shows the Freedom Tower with two shine sparkles
- Reverse reads: "ONE DOLLAR WE WILL NEVER FORGET" and shows the Freedom Tower with one shine sparkle and the coat of the CNMI on the bottom
- Coin is sealed in a protective plastic case and stored in a fabric-lined case

Condition: Item appears to be in uncirculated condition and shows no signs of wear or dirt. The inside backing of the case is loose and unglued to the wall of the case.

Payment Instructions
Items are required to be paid in 7 days.... For items being Shipped, credit card payments can be processed through Paypal at Checkout........Payment for items being picked up can be made in advance online by e-Transfer to [email protected] or in person.