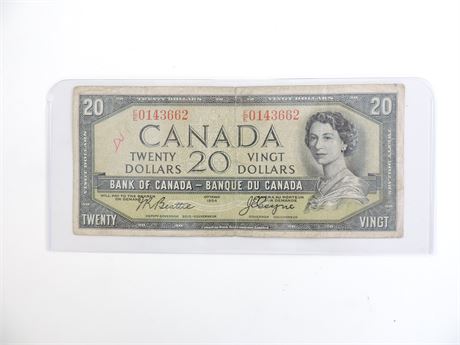 Every now and then an item comes along with such a fascinating back story that it's just too good to resist and this Canadian "Devil's Face" twenty dollar bill from 1954 is just that type of item. It's said that if you look closely, the design in the Queen's hairstyle somewhat resembles the face of the Devil, which is why when people started to notice this, the bill was removed from circulation, making it now a wonderful and rare collector's item. Whether you're a seasoned collector or just starting out, this bill is definitely something you won't want to miss out on!

Please note, this bill has NOT been professionally graded or appraised.

Condition: Bill appears to be in circulated condition and shows some dirt, wear, stains, creasing and some edge tears from use and age. Red pen mark on the obverse side. Again note that this bill has not been professionally graded or appraised.